Hey there!  Here’s another music review coming to you from DJ leaveit2me.  This one is on the group 2PM!  Now, for you steadfast J-Pop fans, I’m sure you’ve noted by now that I am cheating a bit here.  2PM is actually a K-Pop group.  To put it on a J-Music list isn’t very accurate.  However, this is my blog, so I can do whatever I want.  Plus, 2PM did an anime ending.  That’s “J” enough for me.

As well, this review will not be nearly as detailed as some of my others.  There is a simple explanation for this.  The way I survey a groups work is to take their discography and listen to everything.  Everything.  I slowly crunch through and delete songs that are not to my liking.  Then at the end, I compare how many songs are left over, relative to how many albums, singles, EP’s etc. that group released.  From their I can give my rating of the group’s body of work, usually as a qualitative “yield”.  For example, I would say The Pillows are a “high yield” band for me.  HYDE, so far, seems to be more of a “medium yield” artist.  From what I’ve heard of 2PM, I would categorize it as a “low yield” group.  This is simply a result of the combination between my taste in music and their tendency be formulaic.  The latter is a common affliction of most popular groups that are under pressure to produce a large volume of material in a limited amount of time.  I’m not being critical of that (God knows I have not right to do that), but that is my logical conclusion based on the tracks I’ve heard.  With that, let’s get to the music! 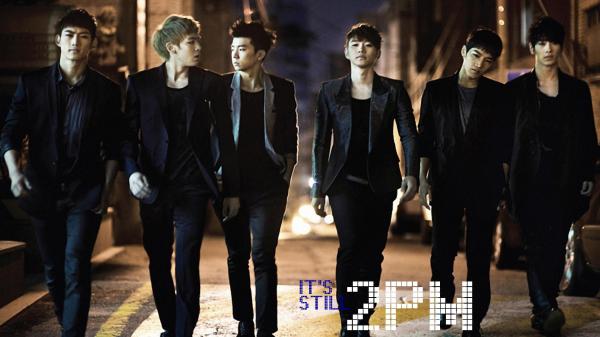 With 2PM, there are a few variations that they do on their general tune.  First is their fast-paced, major key style.  Best example, “A.D.T.O.Y.” from their 2013 album Grown.

It’s quick, it’s catchy, and the dance number is decently choreographed to fit into the black and white video that apparently has to deal with approaching women.  No deep conversations here, just sex.

Next, we have the dance hall number.  This is the song that you think of when you imagine a stereotypical Korean disco.  It has a steady beat, the same music going on in the background while “Da Boyz” bring “Da Lyrics”.  Case in point, “Hands Up” from their single… Hands Up.  Very creative.

Lastly, there’s the love song.  Pretty basic stuff here.  I mean, take “I’ll Be Back” from their album Still 2:00 PM.  With a title like that, you know that there was some guy in the office drawing romantic clichés out of a hat.

Okay, let’s stop for just a second.  I guess I’m sounding pretty critical of 2PM right now, and you may be wondering why I’m writing about them at all if I don’t like them that much.  Well, to tell you the truth, it’s not that I don’t like them.  However, I’m trying hard in order to not give you the impression that I love them.  Perhaps a bit too hard.  As I’ve expressed already, this was a “low yield” group for me.  However, whatever I did like, I genuinely liked it.  Here’s an example of one such classic, and it’s the only one that they’ve done for an anime.  This is the 1st ending to Ao no Exorcist, “Take Off”.

Yup, now that’s what I’m talking about.  This is leaveit2me, signing off for now.  Have a great day!